The left diagram shows the Gaussian- or normal distribution curve, representing the statistical distribution of IQ scores for a given test.
The height of the curve above the IQ score on the horizontal axis indicates how many people have such an IQ score, proportionally. The top of the curve, which correlates to the relatively largest number of people, is defined as the average IQ-score that is 100.
The uncoloured part to the right of the vertical line represents the group above the boundary value of 2%, the gifted individuals.
This (typical) representation gives the impression that this group of people is quite homogeneous, because they have a comparably high IQ. But it is actually the projection of an enormous diversity onto one parameter in a two-dimensional plane. 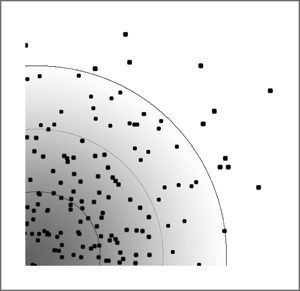 The right diagram illustrates how individually different the 2% exceptions are if we consider the projection of a combination of two parameters using a two-dimensional normal distribution: these are the dots in the white part, beyond the outermost circle segment. What these dots have in common is that they are widely separated from the centre which lies at lower left (the average, i.e. IQ=100), but they have little else in common. If this is the picture for a few areas of Xi, and so many areas exist, it is quite understandable how small the chances are of meeting an XIP whose “Xi-nature” resembles someone else’s,

“….therefore I cannot be gifted.”

In her article Self-Knowledge, Self-Esteem and the Gifted Adult (1999) Stephanie Tolan describes how difficult it is to recognize one’s own giftedness, due to the immense diversity of this population of “uncommonly intelligent people.
As an example, see here the following fatal line of thought:

There are comparatively more ways in which one can be an XIP, than one can be normally intelligent.

The right diagram also illustrates how small the chance is that one’s expectations of what an XIP can or cannot do will match identically with the XIP under consideration. XIPs tend to provide their environment (and themselves) with surprising qualities. This may work like birthday presents: The less precise the expectations about the presents are, the more disposed one is to joyful amazement and gratitude when the wrapping comes off.

And a further benefit is: The more an XIP will be stimulated to grow and develop himself/herself instead of trying crampedly and desperately to conform to expectations of a certain normed performance.
See also the webpage on Mindset in Apply Xi.