The Xidentity is a collection of nine characteristic facets of extra intelligence that mutually influence each other. These nine facets can be used as focal points to achieve clarity about how someone is Xi.
Of course, Xidentity is not a complete blueprint of someone’s personality; this would be a rather narrow view of the wealth of characteristics that every person possesses. It is a model from our own counselling practice by applying various available methods and concepts to all kind of aspects of personal behaviour, in the context of extra intelligence or giftedness.
The facets of Xidentity are like lenses through which to look at yourself or someone else. They attract attention to a certain aspect of the personality that may be very characteristic of the way someone is Xi.
At the same time the facet facilitates awareness of the broad variety of other possible values or types of this aspect, which characterizes other XIPs in your environment. 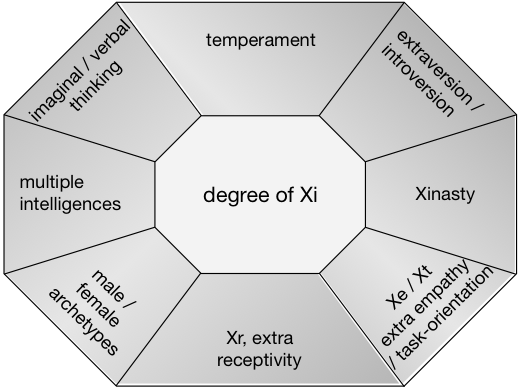 Explanation of the model

The central facet degree of Xi works as a reinforcing factor on the other eight facets. The stronger one’s Xi is, the more extreme the character or expression of the facets will be.
The grouping of the eight facets around the central facet is linked to typical characteristics of XIPs, as described under Acknowledge Xi: Intense, Complex and Driven (or Focus). Some of the facets show up at more than one of these three characteristics.


The Intensity of an XIP manifests itself relatively strongly in dealing with the grey-coloured facets: 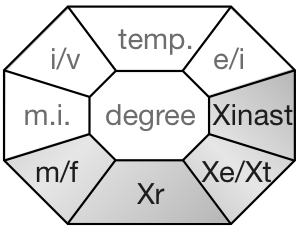 The Complexity of an XIP manifests itself relatively strongly in dealing with the grey-coloured facets: 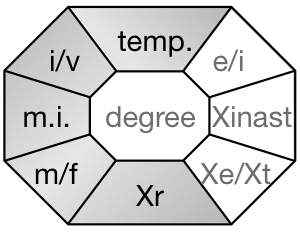 The Focus/Drive of an XIP manifests itself relatively strongly in dealing with the grey-coloured facets: 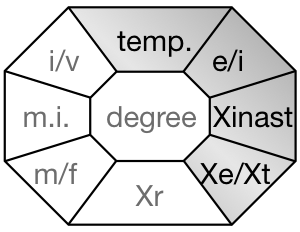