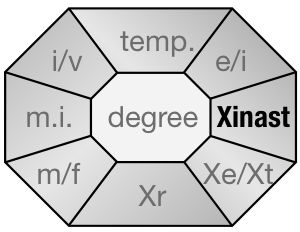 The novel concept of Xinasty is a combination of Xi and dynasty.
A dynasty is a ruling family. By using the term Xinasty we want to convey the idea that there often appears to be an implicit prevailing notion about Xi within a family, including ancestors. Such a notion can work in a severely restrictive way regarding the acceptance of, and dealing with, one’s own Xi, certainly if that notion is not a consciously made one.

The “birds of a feather flock together” effect results in Xi couples being formed. Given the strongly hereditary component of Xi, there is often a majority of family members in which Xi characteristics can be observed, even if their expression can take extremely divergent forms. This may have been a process already going on for generations, but need not necessarily have resulted in scientific or social prominence. Even so, all the individuals involved have had experience with the feeling – either consciously or unconsciously – of being different from the average person, and they have made their own choices about how to deal with this.

This may involve inhibitory convictions like:
“Make sure you never get noticed” or
“Take it easy, otherwise it might be dangerous,”
or normative life rules such as:
“You can’t make a silk purse from a sow’s ear.”

It may also have resulted in the creation of a strong and enjoyable Ximension within the family, where expressing one’s talents is naturally encouraged.

Confusion about gifted and non-gifted

The classical definition of being gifted is often a confusing factor: Excellent performance at school or during a study is considered as being a necessary criterion for giftedness.
Failing at school leads to a lifelong judgement of “not being particularly intelligent.” For example, a strong capacity for imaginal thinking, either linked to dyslexia or not, or a strong psychomotor extra receptivity (not being able to sit still at school) leads to dropping out or to being relegated to vocational education. This often occurs in more than one member of the family and can result in a prevailing notion that “our kind of people” just isn’t that intelligent.

Another example within a family is: One child turns out to be the smart one at school, while the others are more interested in music, drawing or other “hobbies”, or in networking with a chosen few of their own age.
Of course these others are not considered gifted, only that “smart at school” child is. Often negative reference is made in this context to characteristics of “ungifted” uncles, aunts, grandparents, etc. This can have a stigmatising effect on such a child.

One of its possible effects is not being able to accept having an uncommon intelligence, and rejecting the idea of being an extra intelligent person. Being an extra intense person can be more attractive then.
When a son or daughter is labelled by others as possibly being gifted, or, for that matter, not gifted, these types of experiences can lead to vehement responses from their parents. Such a strong reaction does not leave the child unscathed, and thus the pattern continues.