Around 2004, I was intrigued by the experience that I was not always inspired by walking a random labyrinth at a random location. I compared it in my mind to ornate churches that one visits as a tourist during holiday travels. Sometimes you enter just a building although it is beautifully decorated, sometimes the building proves to be a place that nourishes your heart.
I had been practicing “working with energies”: perceiving and influencing the exchange of energy between others and myself. So it was no surprise that I started my research in that direction.

I had also noted during my visits of the Annual Gathering of the Labyrinth Society, that a large majority of the attendants was female. Did that imply something about the nature of the labyrinth? There were presentations that suggested that labyrinths were essentially dedicated to the Goddess or Mother Earth. If so, did women experience labyrinths principally different? How about the role of Daedalus, the male architect of the Cretan Labyrinth (although this was more a kind of maze, most probably), and the role of the Minotaur in the centre of the labyrinth?

My critical questions were welcomed and led to an invitation to give a Keynote presentation at the 2005 Gathering in Lenox, MA. So I urgently needed to find the answers to my questions beforehand.

There was an additional reason for my drive to find out about masculine energies: In the past years I had become aware of the differences between masculine and patriarchical and of my preferences for the first variety. Simply put, the relation between male and female can be based on equivalence and complementarity. But in a patriarchy, female is basically inferior to male.
Given my perception of a western society that is essentially patriarchical, there seem to be three typical male roles available: Well built Macho’s, Rational Leaders, or Blundering Companions. Neither of them is able to deal on equal terms with feminine power. So I was curious about masculine, not patriarchical energy in the labyrinth.
For the record, masculine and feminine energies are not restricted to men and women respectively: Everyone is using their own mix of both aspects, as e.g. explained by Jung in his theory on Anima and Animus.

A magnifying glass for m/f energies 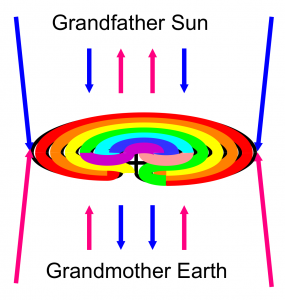 Using literature, observations of myself and competent others, and a native Americans creation story, I explained in my keynote how a well built labyrinth acts as a magnifying glass for vertical currents of feminine Earth energy and masculine Heaven energy. Building or walking a labyrinth allows you to resonate in a well balanced manner on these energies and empowers both energies in your body. It clarifies your identity and related mission.

My keynote was well received. A slightly altered version of this 2005 presentation Remembering the power of sacred creation, attuning to masculine energy through the labyrinth, can be downloaded as a pdf.

Please remember that when you are walking a labyrinth, the issue is not some theory about its function, but your actual experiences while walking it, or whatever you are doing there.

Monday October 10th,
between 3 and 6:30 pm.
The Walk in
to meet us and ask questions / find answers
More on webpage.