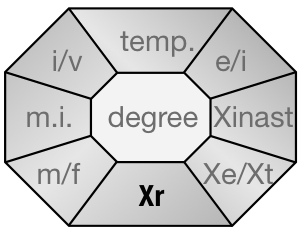 It is a fact that extra intelligent people experience life in an unusually intense manner: They are extremely interested in new developments, very concerned with others, or just as strongly introverted, have an outspoken taste in food, clothing or interior design, an extremely vivid imagination, exceptional or extremely outspoken ideas, and so on.
The average environment considers all this somewhat extreme on occasion, sometimes irritating and almost always astonishing. Conversely, the XIP can be surprised or become agitated when met with resignation, uncritically conventional behaviour, detachment or watered-down ethics on the part of others.

The Polish psychiatrist Kazimierz Dabrowski (1902-1980) developed a striking theory of personal development.
He considered intense inner restlessness or conflict to be a normal phase in psychological growth, whereby the hereditary and socially acquired values and convictions are transformed into a personally structured ideal system.
In Dabrowski’s “Theory of Positive Disintegration,” he proposed that a disintegration of old, less-evolved structures leads to the forming of a new and more complex personality that can envision and create a highly conscious life.
He noted that those who are capable of forming higher-level values would have an inborn extra-sensitivity (phrased in Polish as superstimulatability) of the nervous system: Reactions to certain external stimuli occur more readily, are more intense and last longer than considered normal.

This “condition” has since been called “overexcitability“, a word that associates in everyday language unfortunately as a rather undesirable personal quality.
That is why we have introduced in our practice the term extra receptivity (Xt), and found out that our clients could more easily identify with this approach (it is called “extra ontvankelijkheid” in Dutch).
Of course, the “extra” can become (far) too much, especially under stress. But I think it is important to be fully aware that this superstimulatable nervous system is an essential physical building block for uncommon and even excellent expression.

Five areas of extra receptivity can be distinguished.
Listed below is an adaptation of table 1 in Michael Piechowski’s “Mellow Out” They Say. If Only I Could, showing positive and possibly limitating characteristics.

Dabrowski considered emotional extra receptivity as the dominant driving force in the process of positive disintegration. Someone who is extra sensitive in three or more areas (who is extra receptive for short) experiences reality essentially differently than the average person would: that is to say more intensely and more multi-facetedly.
Because many XIPs have an uncommonly high extra receptivity (Xr) in often more than one area, this offers a partial explanation for their feeling different so often. Additionally, the impact of this intensity on their high abilities in various cognitive processes gives rise to a qualitative different output. They not only have more imaginational or thinking power, but the results are in a kind of different key, compared to individuals of normal intelligence.

The concept of a Highly Sensitive Person (HSP) refers at least to a combination of Sensual and Emotional extra receptivity, but more areas of Xr may be involved. It is my impression that very many XIPs have HSP characteristics. But definitely not all HSPs are XIPs too.

Being aware of the strengths and weaknesses of one’s own Xr is a very important factor in the effective management of being uncommon. Fortunately books like “Living with Intensity” by Susan Daniels and Michael Piechowski, or the already mentioned “Mellow Out” are helpful to get a better acknowledgment of your own position and may provide practical ideas how to deal with that.